The post discusses a simple IC 555 based self optimizing solar battery charger circuit with buck converter circuit that automatically sets and adjusts the charging voltage in response to the fading sunlight conditions, and tries to maintain an optimal charging power for the battery, regardless of the sun ray intensities.

The attached PWM buck converter ensures an efficient conversion so that the panel is never subjected to stressful conditions.

I have already discussed one interesting solar PWM based MPPT type solar charger circuit, the following design may be considered an upgraded version of the same as it includes a buck converter stage making the design even more efficient than the previous counterpart. 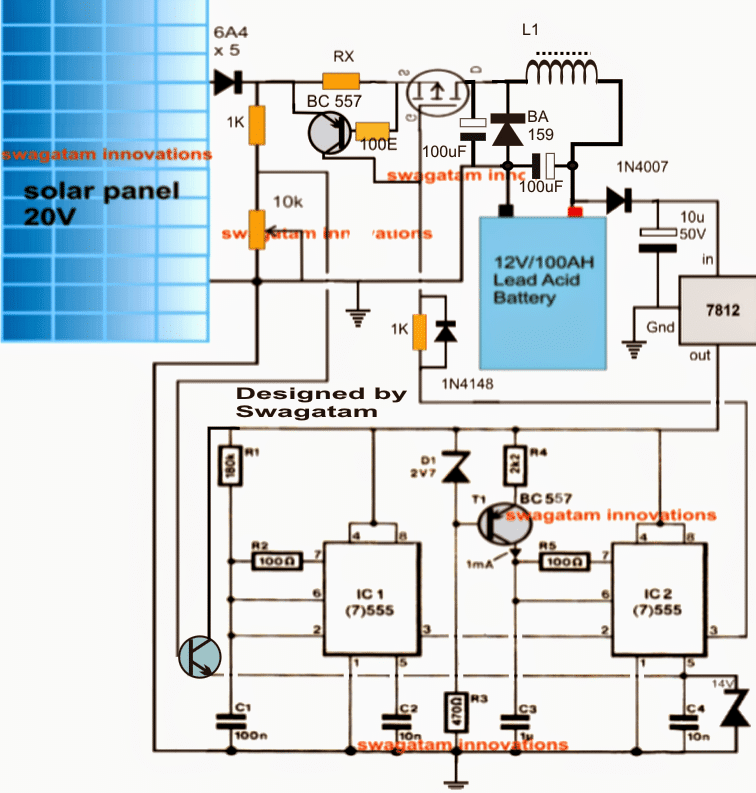 Note: Please connect a 1K resistor across pin5 and ground of IC2 for correct functioning of the circuit.

The proposed self optimizing solar battery charger circuit with buck converter circuit may be grasped with the help of the following explanation:

The circuit consists of three basic stages viz: the PWM solar voltage optimizer using couple of IC 555s in the the form of IC1 and IC2, the mosfet PWM current amplifier and the buck converter using L1 and the associated components.

IC1 is rigged to produce a frequency of about 80 Hz while IC2 is configured as a comparator and PWM generator.

The 80 Hz from IC 1 is fed to pin2 of IC2 which utilizes this frequency for manufacturing triangle waves across C1.... which are further compared with the instantaneous potentials at its pin5 for dimensioning the correct PWMs at its pin3.

The pin5 potential as may be seen in the diagram, is derived from the solar panel through a potential divider stage and a BJT common collector stgae.

The preset positioned with this potential divider is initially appropriately adjusted such that at the peak solar panel voltage the output from the buck converter produces the optimal magnitude of voltage suiting the connected battery's charging level.

Once the above is set rest is handled automatically by the IC1/IC2 stage.

Now, as the sun light begins diminishing the voltage across the set potential divider also begins to drop proportionately which is detected at pin5 of IC2....on detecting this gradual deterioration of the sample voltage IC2 begins widening the PWMs so that the buck output is able to maintain the required optimal battery charging voltage, this implies that the battery continues to receive the correct amount of power regardless of the sun's retarding illumination.

L1 should be dimensioned appropriately such that it generates the approximate optimal voltage level for the battery when the solar panel is at its peak specification or in other words when the sunlight is in the most favorable position for the solar panel.

RX is introduced for determining and restricting the maximum charging current limit for the battery, it may calculated with the help of the following formula:

How to set up the above self optimizing solar battery charger circuit with buck converter circuit.

Suppose a 24 V peak solar panel is selected for charging a 12 V battery, the circuit may be set as instructed below:

Initially do not connect any battery at the output

Connect 24 V from an external C/DC adapter across the points where the solar panel input is required to be fed.

Connect a 12 V for the IC1/IC2 circuit from another AC/DC adapter.

Adjust the potential divider 10k preset until a potential of around 11.8 V is achieved at pin5 of IC2.

Next, through some trial error tweak and optimize the number of turns of L1 until a 14.5 V is measured across the output where the battery is required to be connected.

That's all! the circuit is now set and ready to be used with the intended solar panel for getting an optimized highly efficient PWM buck based charging procedures.

In the above self optimizing solar battery charger circuit with buck converter circuit I have tried to implement and extract an oppositely varying voltage and current output from the the circuit with respect to the sunlight, however a deeper investigation made me realize that actually it should not be responding oppositely rather corresponding to the sun light.

Because in MPpT we want to extract maximum power during the peak hour while also ensuring that the load does not hog the panel and its efficiency. 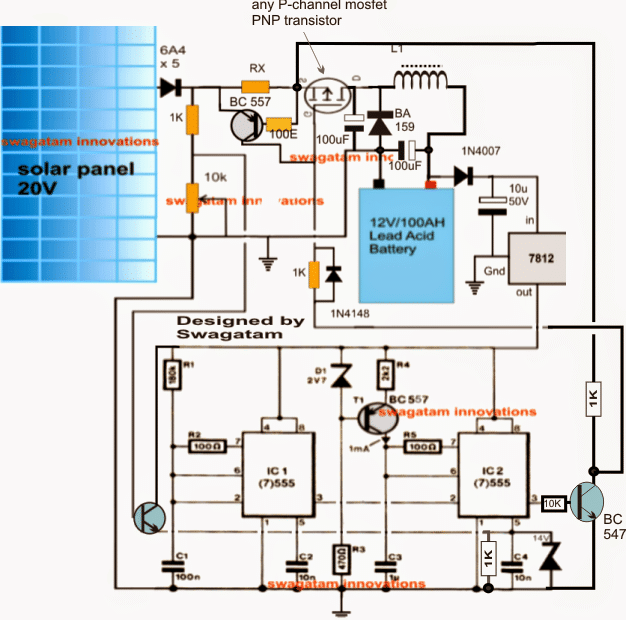 In the above updated design I have made the following important change:

I have added a NPN inverter at pin3 of IC 2 so that now the PWMs from IC 2 influences the mosfet to extract maximum power from the panel and reduces the power gradually as the sun light diminishes.

The PWM pulses along with the buck converter guarantees a perfect compatibility and maximum power extraction from the panel, but diminishes gradually in response to the sun's diminishing intensity.

However, the above set up makes sure about one important aspect, it ensures a balanced input/output power ratio which is always a key issue in MPPT chargers.

Further if in case the load tries to extract an excessive amount of current, the BC557 current limiter immediately comes into action preventing the disruption of the smooth functioning of the MPPT by cutting off power to the load during those periods.

Contemplating the Finalized Design of an MPPT Circuit

After going through rigorous further assessments, I could finally conclude that the second theory discussed above cannot be correct. The first theory makes more sense since an MPPT is meant solely to extract and convert the extra volts into current that may be available from a solar panel.

In order to implement this, the PWM would need to be proportionately thinner while the sun was at the peak and releasing the extra volts.

However, as the sun power diminished, the PWMs would be required to broaden so that the buck converter was continuously enabled with the optimal amount of power for supplying the load at the specified rate regardless of the sun intensity.

To allow the above procedures to happen smoothly and optimally, the first design appears to be the most appropriate one and the one that could fulfill the above requirement correctly.

Therefore the second design could be simply discarded and the first design finalized as the correct 555 based MPT circuit.

I did not find it appropriate to delete the second design because there are various comments that seems to be linked with the second design, and removing it could make the discussion confusing for the readers, therefore I decided to keep the details as is and clarify the position with this explanation.