The post explains a simple LM317 IC based RGB 3 watt LED color mixer circuit, which can be used for demonstrating the color mixing effects of red, blue, green colors as specified in the standard color charts. The idea was requested by Mr.Praveen.

My name is Pravin, I work in school as Physics technician.I need to show kids colour mixing of red green and
blue. I would like to be able to vary the brightness of the three
colours LEDs to show the effect it has on screen. I have 3W RGB LEDs.
Could you please help me to make a circuit . The simple the better.I have tried to make one with LM317 IC.
Regards,

According to the datasheet of this LED the three leads on each side correspond with the three leads on the other side on a straight line such that the two straight ends left to right form the terminals of the red, green, blue LEDs embedded respectively inside the package. 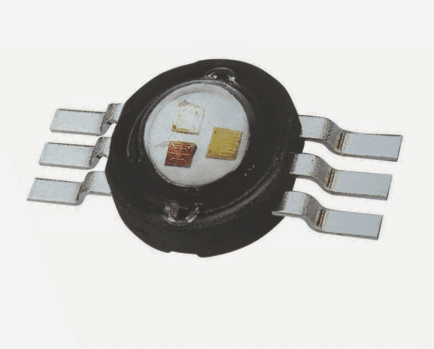 How to Configure the LED Pinouts

Configuring these leads of this RGB LED such that the individual colors can be adjusted separately, is actually quite easy.

Referring to the above diagram one can visualize that the three LM317 voltage regulators are in fact exactly identical with their part and wiring configuration.

Each of the modules have the facility of voltage adjustment and are all current controlled through a BC547 transistor and a resistor Rc.

The leads of the 3 watt LED are hooked up individually to the outputs of the 3 LM317 circuits, while the input is fed to all the 3 modules through a common DC source which could be a SMPS adapter rated appropriately for handling the RGB illumination.

The anode, cathode orientation of the LED is also indicated in the diagram which must be carefully and correctly set before connecting them to the 317 outputs.

Once everything is completed, and the power is switched ON, the voltage control feature present in the LM317 modules can be used for setting up the illumination levels of the respective LEDs discretely for creating any of the specified color effects, right from the primary RGB to voilet, indigo, orange, maroon etc etc.

The 10K presets of the 317 circuit can be replaced with 10K pots for enabling an external control for the intended color mixing effects on the LED.

The value of  Rc can be calculated by using the following formula:

For color mixing, 3nos of 8050 variable voltage power supply could beuilt and their outputs connected with points A, B and C.

For creating fading effect, fading circuit could be connected to point E

For flashing effect point F could be used for supplying the flashing signal.