You are here: Home / Sensors and Detectors / Make this Temperature Indicator Circuit with Sequential LED Display

In some of my earlier articles we have seen a few simple and interesting temperature indicator circuits, in this article we will try to upgrade one of them into a sequential form.

All these circuits are useful in some or the other ways, however these are not equipped with  step wise temperature level indicator arrangement and therefore tracking the varying levels of temperature cannot be identified using them.

The present design eliminates the above issue, as here the entire temperature range becomes visible through an arrangement of an LED array.

The LEDs in this circuit reads the temperature levels discretely via 20 steps of LED indications.
The proposed sequential LED temperature indicator circuit is definitely the simplest to build, since it is based on a single outstanding IC LM3914 from TEXAS INSTRUMENTS, which single handedly performs the whole action of displaying the readings in a sequential manner.

The LEDs show an incrementing temperature through a single illuminated LED at the relevant positions of the array, thus the present design shows a dot mode indication instead of a bar graph.

The dot mode arrangement specifically helps to save battery power because only one LED is involved for the required indication at any instant.The IC LM3914 is basically a millivolt measuring device which is able to convert a varying milli volt input into a corresponding LED readout at its output pin outs.

Here the input is derived from another interesting IC LM35 from TEXAS INSTRUMENTS, which is configured as an ambient temperature sensor device.

The IC LM35 coverts the temperature differences around it, directly into varying milli volts across its output.

For every single degree change in the temperature, the IC LM35 generates an output with a 10 mV variation.

This correspondingly varying milli volts is applied at the input of the IC LM3914, which readily accepts these variations, making them visible at the output through the connected LEDs.

Thus as the temperature around the IC LM35 increases, it generates a correspondingly increasing mV  across its outputs which is in turn transformed by the IC LM3914 into an LED readout, displaying the relevant level of the sensed temperature.

The LED array should be appropriately calibrated, through some trial and error and some practical experimentation. 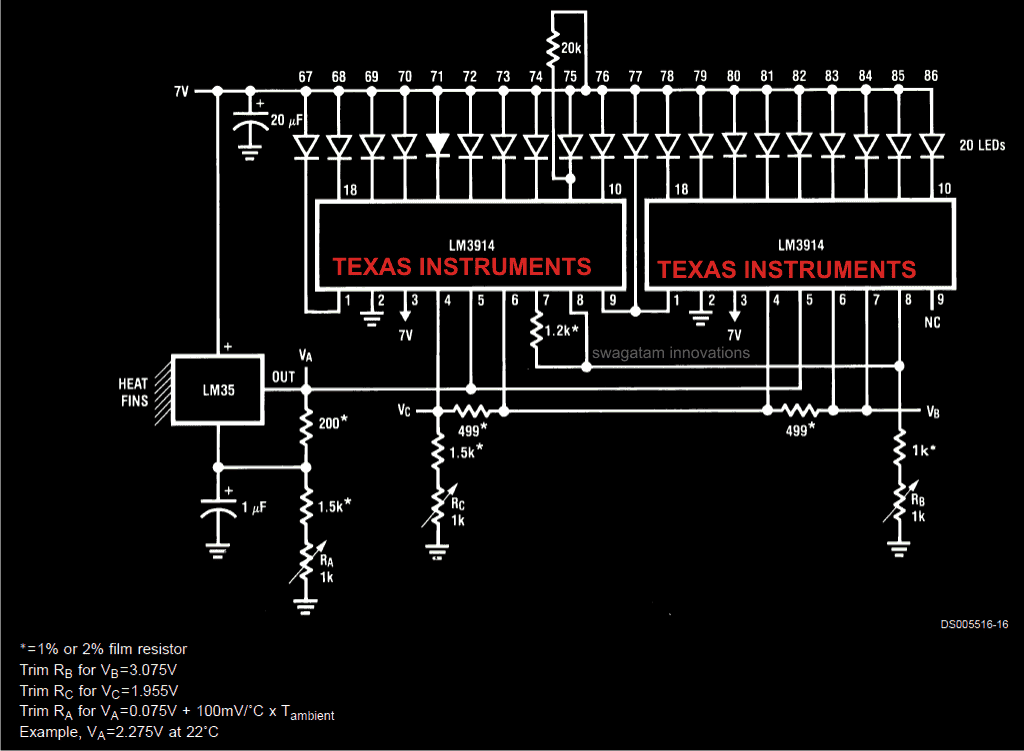