You are here: Home / 4017 IC Circuits / How to get Free Energy from a Pendulum

In this post we'll try to understand regarding how a pendulum mechanism can be used for achieving overunity and generate electricity in the form of free energy.

We all know and have practically seen how a pendulum works or oscillates. Technically it may be defined as a mechanism made up of a shaft with a weight hanging at its lower end, and the upper end of the shaft being hung over a fixed pivot, such that when the weight is given a manual push, the shaft is forced with a lateral swinging movement wherein the pivotal point experiences a minimum or a zero displacement compared to the weight end which undergoes a maximum relative displacement while the oscillation is in progress.

A pendulum can be considered as one of most efficient mechanisms, just like the lever mechanism which has the potentials to produce a "work" output which may be much higher than the "work" done at the input.

This may be witnessed by the fact that a pendulum is able to sustain a strong swinging action for a very long period even with an insignificant amount of force applied by a manual push on it. The high ratio of input and output work done by a pendulum is achieved due to two external forces acting on the system, namely the gravitational force and the centrifugal force.

The input to output work ratio can be deduced by studying this simple example:

Assessing the Hidden Overunity in Pendulum

However one drawback of the pendulum is that just like any other mechanism it's too restricted by the first law of thermodynamics, and therefore its swinging action gradually slows down until finally it reaches a halt.

Anyway, here it would be interesting to investigate how the extreme efficiency of the pendulum can be made to do some useful work and also how the oscillations can be sustained permanently by an external trivial amount of force 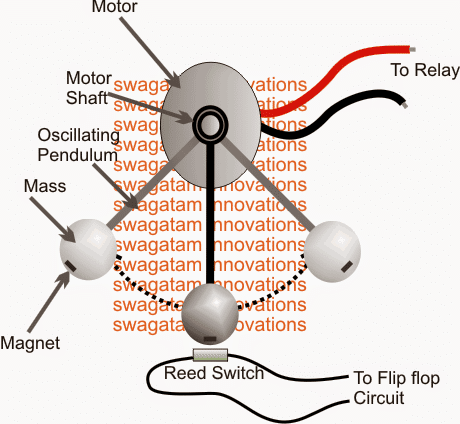 Referring to the image above, the set up shows a pendulum shaft connected with a motor spindle. The pendulum rod has a heavy spherical mass attached with its lower end, the mass has a permanent magnet stuck at its lower edge.

The motor wires are connected with a relay mechanism, while the reed switch is configured with a flip flop circuit, as may be learned from the following discussion:

The objective here is to provide the motor with a clockwise and an anticlockwise instantaneous rotational pushes so that the pendulum swinging action connected with its spindle is sustained permanently.

The motor here acts like a motor and as well as a generator which receives the sustaining pulse from the battery in order to keep the pendulum kicking, and also simultaneously generates the charging electricity for the battery, but at a  much higher rate than the pulse rate.

The circuit functioning of the proposed pendulum free energy generator may be understood with the help of the following points:

The IC 4017 forms a simple flip flop circuit which toggles its outputs alternately ON and OFF in response to the pulses from the reed switch at its pin#14.

The alternate ON/OFF switching at the output of the IC triggers the relay driver correspondingly and toggles the DPDT relay on every crossing of the pendulum mass across the reed relay.

The moment the pendulum mass crosses the reed, the reed contacts close causing a trigger pulse at pin#14 of the IC which in turn toggles the relay, the relay flips the connected voltage polarity to the motor such that the pulse complements the clockwise or anticlockwise movement of the pendulum, reinforcing the swinging action of the pendulum by a bit on each of its swinging cycle.

The presence of the two series capacitors with the relay contacts makes sure that the pulse is only momentary and only a factional energy is used for keeping the pendulum swinging.

In the meantime the movement of the pendulum produces enough electricity for keeping the battery charged to a degree where its energy becomes sufficient to be used for powering some other external gadget.