In this post we learn how to build a energy efficient soldering iron station circuit for achieving maximum power saving from the unit, by ensuring that it is automatically switched OFF when not being used for sometime.

Written and Submitted By: Abu-Hafss

To design a circuit for solder iron which would not only save the energy but also avoid the over-heating of solder iron tip.

a) Switch ON and warm-up the solder iron for about 1 minute.

b) Check if the solder iron is present in stand or not.

c) If not present, the solder iron gets 100% power, directly from AC mains.

d) If present, the solder iron gets 20% power thru regulated circuit.

Circuit Set up and Schematic 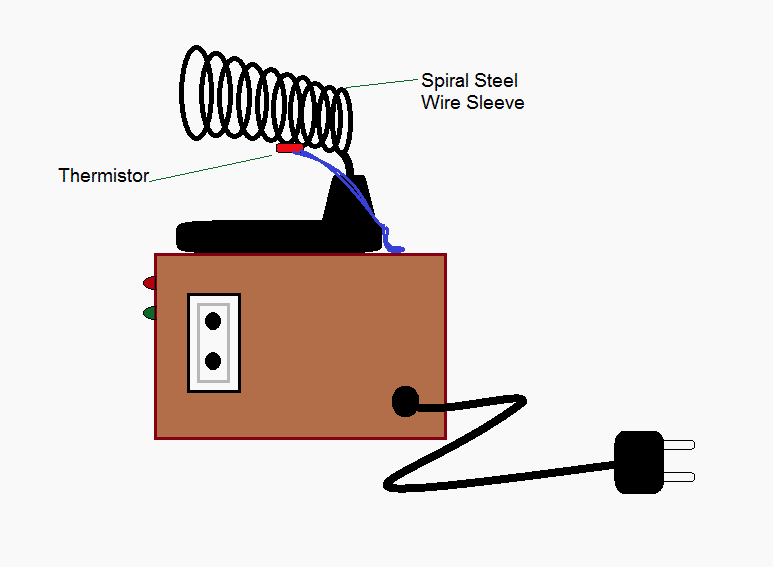 a) A 555 timer is configured to delay power on for about minute. During this period the solder iron is connected to AC mains thru the "NC" contacts of the relay.

The red LED would indicate the initial warm-up of 1 minute after which it goes off and the green LED would light up to indicate that the solder iron is ready to use.

b) IC LM358-A is configured as voltage comparator to check the presence of the solder iron in its stand using a thermistor.

Thus the output of LM358-A remains low and there is no change in the operation; the solder iron continues to get power thru the "NC" contacts of the relay.

c) If the solder iron is present in its stand, the increase in temperature will increase the resistance of the thermistor. As soon as it crosses 33k, the potential divider R4/TH1 provides more than 6V at the (+)ve input hence, the output of LM358-A goes HIGH.

This energizes the coil of the relay via NPN transistor T1 and therefore the solder iron is disconnected from the AC mains.

The HIGH output of LM358-A also powers ON the LM358-B network, which is configured as an astable oscillator with a duty cycle of about 20%.

The duty cycle is controlled thru the potential divider R8/R10. The output is connected to the gate of triac BT136, which conducts and switches on the solder iron for 20% of a cycle, thus 80% of power is saved while the solder iron is at rest.

1) Since the triac (operating AC mains) is directly connected to the rest of the circuit via R12, care should be taken and the circuit should not be touched when powered on. For protection, opto-isolator like MOC3020 can be incorporated.

2) Any value of thermistor may be used but, the value of the R4 should be selected accordingly such that R4/TH1 should provide about 3V at normal temperature. Moreover, the increase in temperature of the spiral steel wire sleeve due to the presence of solder iron should also be taken into account.

3) The triac cannot be replaced with a relay because of two main disadvantages:

a. Continuous rattling sound of the relay contacts could be annoying.

b. The continuous and swift switching of the relay contacts will cause high voltage sparks.

4) The thermistor legs should be covered with heat resistant insulation sleeves and then installed suitably on the iron stand.

5) The 12V DC supply (not shown) may be obtained from AC mains using a step-down 12V transformer, 4 x 1N4007 diodes and a filter capacitor. For details, read this article https://www.homemade-circuits.com/2012/03/how-to-design-power-supply-simplest-to.html

The above explained circuit of an energy saver soldering iron is appropriately modified and corrected in the following diagram. Please refer to the comments for a detailed info regarding this modification:

The next concept below discusses another simple automatic soldering iron power shut off timer circuit which ensures that the iron is always switched OFF even if the user forgets to do the same during the course of this routine electronic assembly job work. The idea was requested by Mr. Amir


My name is amir of Argentina ... and I am repairing technician but I have a problem I always forget the soldering iron on, ested can help me with a circuit for self disconnection time, my idea is ...

after a while the low power soldering iron in half ...

and sounds a beep beep until you press a button and set the counter to zero, but if not pressed after once off.

from already thank you very much.

Initially when the circuit is powered via mains AC, it stays switched OFF due to REL1 contacts being in a deactivated state.As soon as S1 is pressed the IC 4060 momentarily gets powered via TR1, bridge network activating T2.

T2 instantly energizes REL1 coil at its collector which in turn activates the N/O contacts of REL1 wired across S1.

The above activation bypasses S1 and latches the circuit so that now releasing S1 keeps REL1 activated.

This also switches ON the connected soldering iron via REL1 and N/C of REL2.
Now IC 4060 which is wired as a timer being powered begins counting the timing period set by adjusting P1 as per the requirements.

With pin2 switching ON first after 5 minutes triggers REL2 which now shifts its contacts from N/C to N/O. Here N/O can be seen connected to iron via a high watt resistor, meaning now the iron gets switched to receive less current making its heat lower than the optimal range.

In the above condition T1 being switched ON, the buzzer at pin7 gets the required ground supply via T1 and starts beeping at some frequency indicating the iron being shifted to low heat position.

Now if the user prefers to restore the iron to its original condition could press S2 resetting IC timing back to zero.

Conversely if the user is inattentive, the condition persists for another 5 minutes (total 10 minutes) until pin3 of the IC also goes high switching OFF T1,/REL1 such the whole circuit now shuts down. 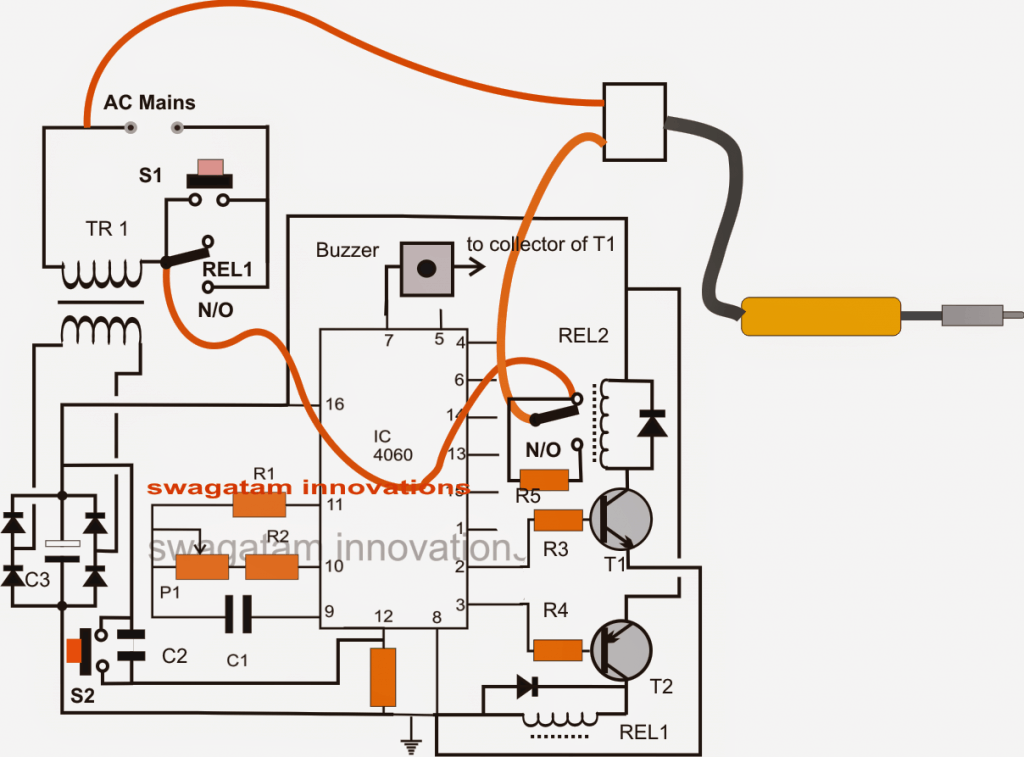 A redrawn version of the above diagram can be seen below, it was suitably improved by Mr. Mike for helping easier understanding of the wiring details. 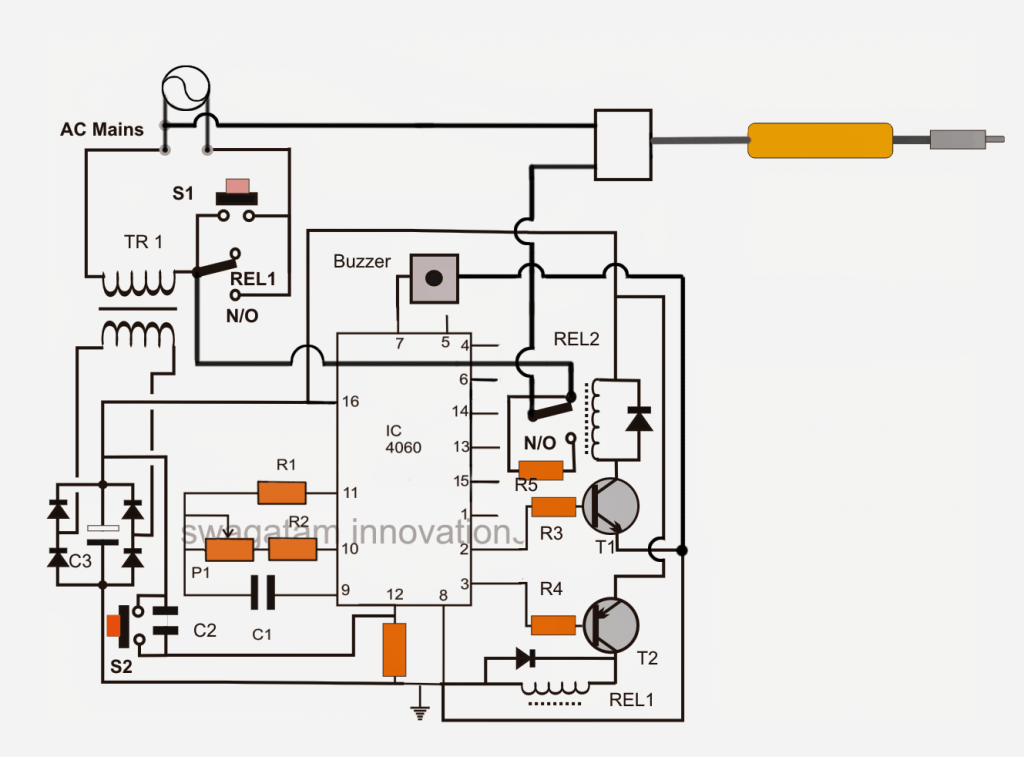