In this post we learn a reverse forward timer circuit for operating an incubator motor mechanism with a preferred set of movements. The idea was requested by Mr. Anwar


I am from Indonesia..... I Need Schematics For Incubator Timer with High Torque Motor (DC Motor Power Window in Car). I am trying to get a DC motor to run in two direction until it reaches the end position then stop and switch polarity so it will run the other direction when power is reapplied. Then do the same thing at the other end.

2. motor runs in one direction until it hits stop position, say 30sec.

3. power to motor turns off when it hits stop position and delays for the 1min. timer to end/turn off main power. also reverses polarity so that.

4. next time the main timer comes on (10:00-10:01) it dose the same thing in reverse direction and repeating continuously

Can you Help me Sir?

Thank you in advance for any help.

This is an important home project that needs to be 100% reliable. 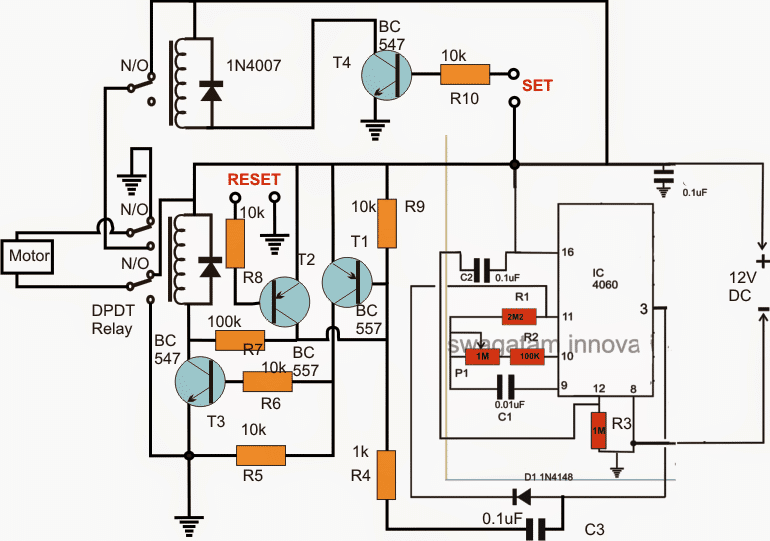 In the figure above we can visualize a design for implementing the proposed reverse forward motion of an incubator motor after a predetermined set of time interval.

At the instant when power is switched ON we have the following scenario:

The magnetic switch for "set" may be assumed to be in a deactivated state or depressed while the motor or the designed incubator mechanism is in its zero start position.

With power is switched ON, IC 4060 is reset via C2 so that it initiates it counting process from zero, and pin3 is rendered a zero logic.

This initial zero logic is fed via C3 to the base of T1 which instantly conducts forcing T3 and its associated relay to activate. R7 in the process makes sure T1/T3 get latched in this mode.

The DPDT relay at this point actuates at its N/O contacts initiating the motor and the mechanism towards an assumed "forward" motion.

As soon the motor begins moving, the "set" button is released such that T4 and the upper SPDT gets an opportunity to actuate, wherein the SPDT relay attains a N/O position changeover rendering the N/C contacts of the DPDT with a standby supply..

The motor and/or the mechanism keeps moving until it has attained the "reset" position which causes T2 to activate and break the T1/T4 latch.

With T4 switched OFF, the DPDT relay changes its position from N/O to N/C and provides an opposite (reverse) movement to the motor mechanism.

The incubator motor mechanism now flips its direction and initiates a reverse motion until it has reached the "set" point which quickly switches OFF the base drive of T4, the SPDT switches OFF cutting power of the DPDT and the entire mechanism comes to a stand still.

In the meantime the IC 4060 continues counting until it has yet again produced a zero logic after going through a high logic at its pin3 (by discharging C3).

The cycle once again gets initiated and repeats the procedure as explained above.