You are here: Home / Audio and Amplifier Projects / Make this Radio Repeater Circuit at Home

The post discusses a simple radio repeater circuit which can be built by any new hobbyist or a radio amateur for communicating over long distances using ordinary transmitters and radio receivers.

In this article we are going to see what radio repeater is, how it works and how to build one in a hobby lab. In the end you would be able to build a micro repeater station for the proposed full duplex communicator design in this article. This may be used for short distance communication when you are on a camp or use as an intercom or some similar applications.

NOTE: Follow the strict rules and regulation implemented by your local and country government before proceeding with this project.

What is a Radio Repeater

Here we are taking walky-talky as an example. A walky-talky is a half-duplex communication device, which means the communication takes place in one direction at an instant. For example: Person ‘A’ can talks through walky-talky to person ‘B’, but person ’B’ can’t reply simultaneously and vice versa.

During propagation of modulated signal from walky-talky ‘A’ to walky-talky ‘B’, there could be obstacles between them, such as mountain, buildings, trees, etc. These obstacles could potentially reduce the range of the propagated signals, thus the person at the receiving end may hear broken signals.

To avoid this kind of issues we go for a radio repeater. A radio repeater repeats the transmitted signal to wider range, even over several 100 KM, which ensures that the receiving party will receive a clear signal.

In other words a repeater extends the range of the signal being transmitted.

The repeater station is place on top of hills, so that it can receive maximum signal from a node and re-transmit to single or multiple nodes with less distorted signal. The repeater must be within the range of the transmitting node, only then the repeater may be able to re-broadcast the signal to multiple nodes.

A full duplex communication is a two way communication, in which both the parties are able to communicate simultaneously. To keep the design as simple as possible we use a standard FM radio as the receiver and a simple FM transmitter.

We need two FM radios and two transmitters to establish full duplex communication. In between two communication sets the repeater will be placed to extend the signal.

The given transmitter design can transmit up to 200 meter on best case scenario. Adjust the trim capacitor for tuning the transmitter. 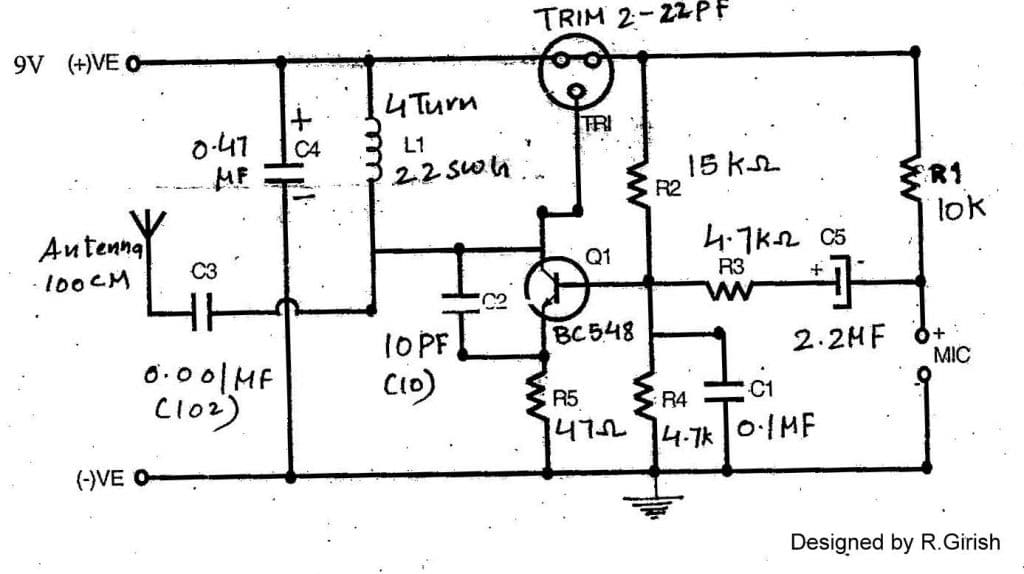 The given radio repeater circuit is a two channel design. A channel consists of one transmitting and one receiving frequency; here we have two such sets.

The radio repeaters in real world consist of several numbers of channels. Here we need two FM transmitters and two receivers (FM radio) for 2 channel design. We can use same transmitter circuit as shown above.

When the repeater comes in between the transmission and reception, the whole system gets slightly complicated. Let’s assume some factors and simulate the situation:

· All the frequencies used in repeater must not be used more than once. For example: 90MHz at TX1 and this frequency should not be used anywhere in the repeater circuit.

· The transmission frequency, repeating frequency and receiving frequency must be well determined before communication just to avoid confusion.

NOTE: Here the node represents one set of transmitter and receiver. Distance between node and repeater is 150 meter is an assumption; it could be greater or less depending on environment and antenna length. Use a radio with good sensitivity for this project.

NOTE: Adjust the volume knob optimally so that the right amount of volume goes to the transmitter. Don’t ramp-up the volume to maximum, otherwise there could be a good chance of distortion in re-transmission.