In this article we will study a simple LED tube light circuit which could be directly replaced with faulty 40 watt T17 fluorescent tubes and fitted directly on the existing fixture. Thus the circuit is compatible with all standard iron ballast fixture assemblies.

How Conventional Fixtures are Wired

As shown in the below diagram, traditional fluorescent fixtures consist of two side connectors, a series iron core ballast and a complementing series starter unit.

All these are normally wired as shown below over a long MS metal fixture. The florescent tube gets fixed between the two spring loaded side connectors which have a couple of embedded clips for holding and connecting the tube light end pinouts. 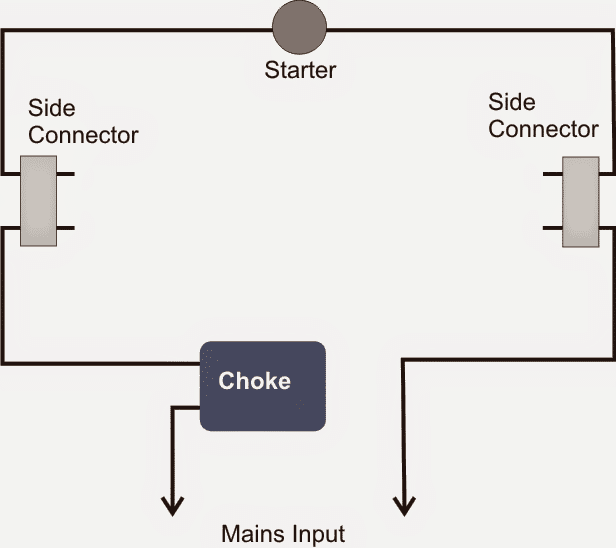 The starter is wired across one of the adjacent pair of end pins while the ballast is attached in series with the other adjacent pins of the side connectors.

The series outputs from the ballast and one of the connectors are finally terminated for receiving the mains AC voltage.

When AC is first switched ON, the starter fires randomly and switches the tube in a flickering mode, which forces reverse high voltage EMFs to be generated by the ballast.

Once the tube is triggered fully the choke or the ballast simply acts like a current limiter for restricting a safe specified amount of amps to the tube as per the resistance of the ballast coil. In good quality ballasts the resistance or the number of turns inside the ballast will be correctly calculated to minimize heat generation and ensure longer tube life.

However one big drawback with these traditional iron core ballasts is the emission of excessive heat while limiting current to the tube, which makes it rather inefficient as far power saving is concerned.

LED tube lights similar to T17 fluorescent have become very common in the market nowadays but these come with their own specific fixtures, and cannot be replaced on the traditional FTL fixtures.

Since most homes have these traditional iron core type fixtures fitted on their walls, getting an LED tube replacement which is directly compatible with these becomes highly desirable and handy.

In this post we discuss a simple LEd tube light circuit which provides all the good features of LED technology and yet is directly replaceable over conventional T17 FTL fixtures.

The circuit design could be seen in the following diagram located at the middle of fixture wiring and shows how the circuit configuration allows a direct installation feature.

The circuit is an ordinary capacitive power supply which is half wave rectified by D1 and filtered by C1.

The zener Z1 ensures a constant 180V DC across the connected LED module.

The LED module is nothing, but consists of around 50 numbers of 1 watt LEDs in series end to end.

The existing choke or the iron ballast is allowed to be in the wiring chain which now acts like a perfect surge suppressor and helps arresting the incoming current in-rush during initial switch ON.

The starter however plays no role in the design and may be either removed or its presence may be ignored. 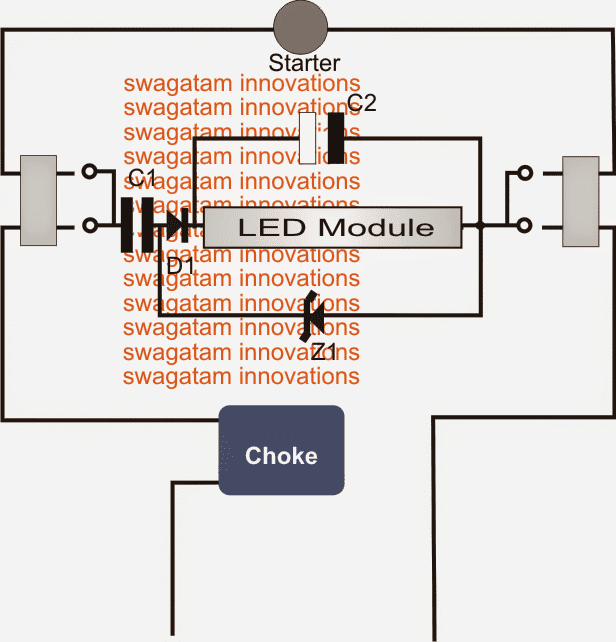