The post explains a safety mechanism circuit which can be used in human powered submarines for safeguarding the diver during emergency situations. The idea was requested by Mr. Marielle.

For a (voluntary) project of the TU Delft in the Netherlands, we are building a human powered submarine. In this submarine we need a safety buoy, which has to be of a "deadman's switch" type. Currently we are designing a electrical system for this. I read many articles on your blog and thought that you might be able to help us with this system.

The system uses a magnet to hold the buoy in the sub. The buoy should be released if the driver would let go of a button (eg release when off). Since we want to prevent the bouy going of by accident (no emergency, finger just slipped of button during the race for a second), we would also like to build in a two-second delay (no need for it to be exactly 2 secs, but a little delay is necessary).

One of our team members has designed a system for it, which you can find in the attachment. I am responsible for the final design, which means it is also my task to check this system. As a mechanical engineering student this is however not really my strength.

You would help us a lot if you could take a look at the system. I most certainly hope that I got al the English terms correctly in the drawing, but if something isn't clear please ask.

Many thanks in advance for your time and knowledge,
Yours sincerely,

From the given info I understand that your requirement is a simple delay ON timer circuit.

The attachment shows a circuit using a microcontroller which appears to be unnecessarily complex, also I could not understand the inclusion of so many regulators, a rectifier, since the circuit uses a 9V battery all these are absolutely not required.

However there are a  few details which I would want to know:1) What is the approximate resistance of the electromagnet coil?

Our system may indeed be unnecessarily complex. We have tried to come up with a simpler system, but we are still struggeling with it.

The term rectifier was a mistake made by me. I tried translating a dutch term in english, and my computer told me it was either regulator or rectifier.

I checked both translations today and concluded that the right term is regulator.

You might be right that the regulators are unnecessary. The reason we used them was because of the different components.

The microcontroller uses 5V, and the coil 12V.

We wanted to use two 9V batteries because they are easier to make watertight than a 12V combination. This then had to be reduced to 12V for the coil (hence regulator

1), and to 5V for the microcontroller (hence regulator 2).

We weren't to sure that all the components in the system would work on 9V without burning/failing/etc.

Analyzing the The Design

Below I have answered your questions:

1) The resistance of the electromagnet coil is 37,9 Ohm. This is calculated using the specs on the website we order it from (nominal power is 3,8W and nominal voltage is 12V) and the easy formula: P is U squared divided bij R.

2) By switch I think you mean the the circle in my drawing, that said "transistor" next to it?

If so, it is a NPN transistor. If you meant the switch the driver holds (button):

This website is in dutch, but the datasheets are in English, and they are quite easy to find. It couldn't however figure out what you needed to know about it though if this switch is the one you meant.

3) It doesn't really matter what happens after the buoy is released.

This is because, like you said, it takes manual effort to bring it back. We do however prefer that it would remain off (latch in that position).

This would save power (and changing the batteries is hard because of the watertight case) and when it toggles back on to quickly we risk that the buoy doesn't exit the sub (release to short, gets attached again). It might be a small risk, and it might be preventable, but we need to convince the judges in our race that it is a perfectly safe system, so no risk is always better than a small risk.

I hope this answers your questions. We are still working really hard on this, and we appreciate your help very much!

We are looking forward to your ideas,
Thanks again!

The proposed divers safety buoy switch circuit shown below is basically a delay ON timer circuit.

As can be seen in the given figure, a couple of 9V batteries are joined in series for acquiring 18V which is suitably stepped down to 12V through a 7812 IC for feeding the adjoining delay ON timer stage.

The indicated push- to-OFF button which is required to be held by the diver as long the person wishes to stay submerged. This switch must be a PUSH-TO-OFF type of switch.

The diver is expected to get water borne with this switch held depressed.

In case (whatsoever) if the above switch is released the 12v is allowed to pass to the base of T1 through R2. However T1 is inhibited from the required 0.6V for a calculated period of time ( 2 seconds) until C2 charges upto that limit.

As soon as T1 conducts, T2 also follows and switches ON the electromagnet releasing the buoy upwards.

R5/D4 make sure, the circuit gets latched in this position rendering a permanent activation to the electromagnet until the circuit is pulled out of the water.

T3/R6 forms a water activated switch, ensuring that the circuit triggers only when it's immersed inside water and the points A and B are bridged with water content.

Only the points A and B  must be exposed to water, rest of the circuit must be sealed tightly inside a water proof appropriate enclosure 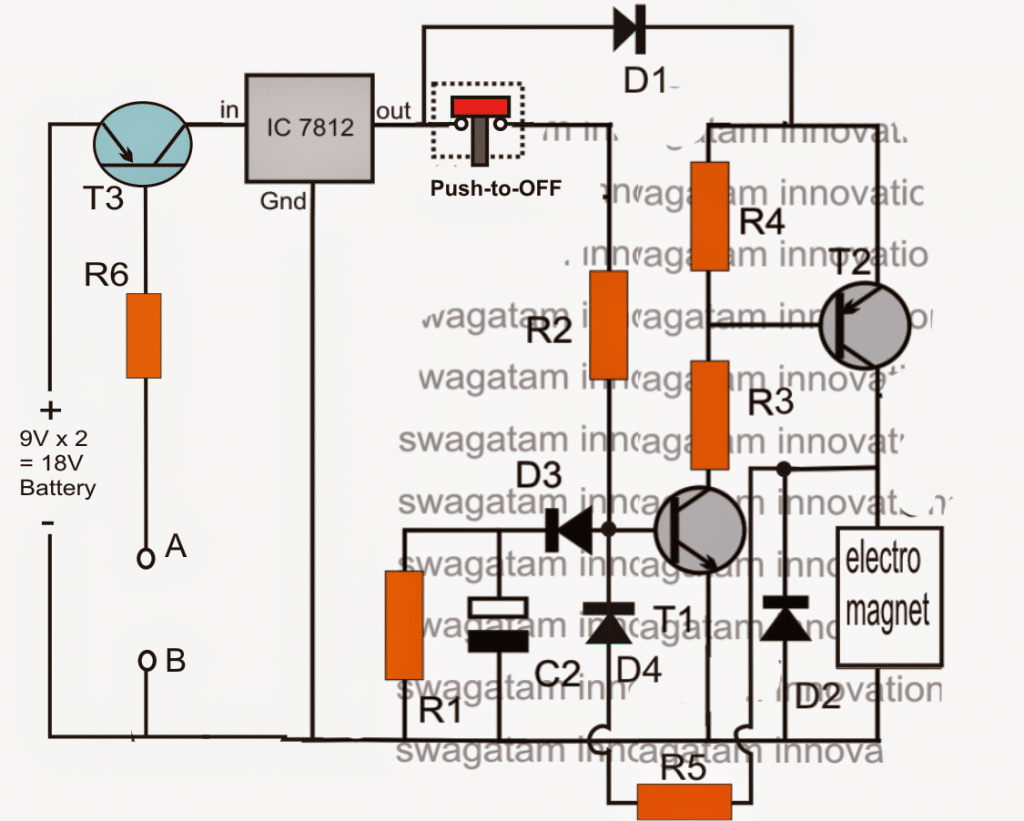 The next human powered submarine safety switch circuit uses a push-to-ON switch for an identical operation as above.

As soon as the diver presses the push-button and dives in the water, points A and B gets bridged with water causing the supply to flow in the circuit.

The switched being kept pressed causes T2 to switch ON thereby holding pin14 of the IC 4017 to ground.

A bright momentary flash over the LED ensures that the circuit is reset and is on an alert standby position.

Now in case the diver under water releases the push-button, this would cause T2 to switch OFF but only after C1 has discharged below the 0.6V level.

At this point T2 being switched OFF would render a positive potential to pin14 of the IC 4017, causing the logic high at pin3 to jump to the next output pinout order which is technically pin#2, but for extreme safety reasons all the remaining outputs have been terminated to the base of T1 via individual diodes.

The above action would instantly trigger T3 and the electromagnet for the intended implementations. 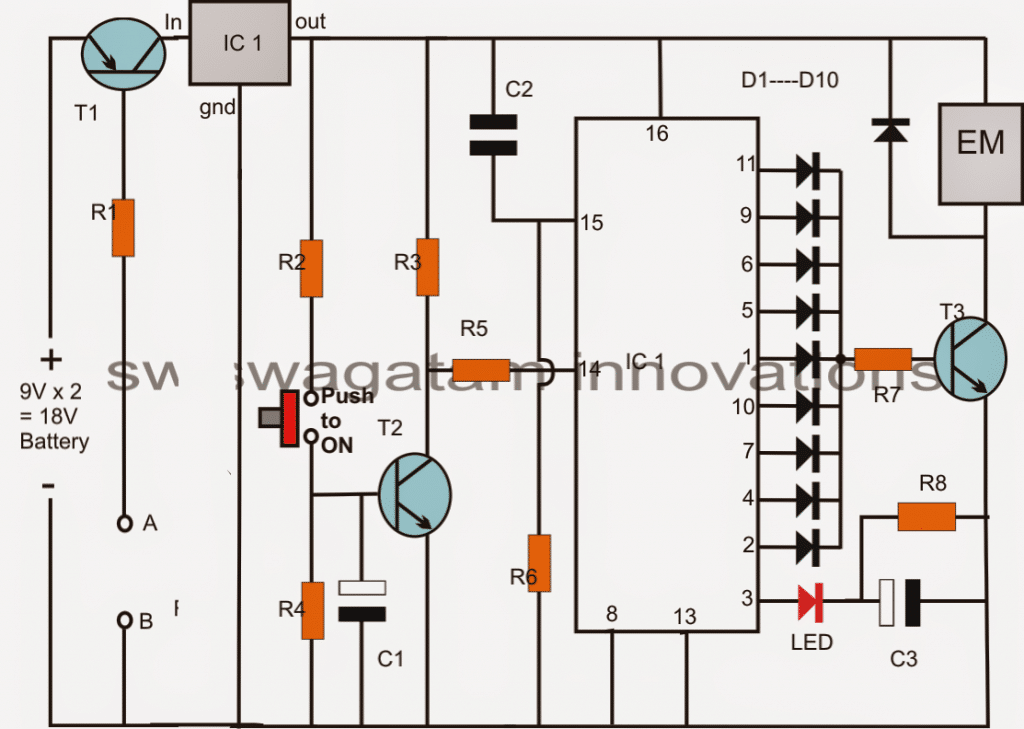 We have just read your blog, and it looks great!
Thank you very much for your help!