Controlling a heavy electrical appliance with push buttons can be extremely convenient since it allows a solid state approach for operating the parameter both ways up and down by mere push of the relevant buttons. Here we discuss a heat controller circuit using a set of push buttons and PWMs. 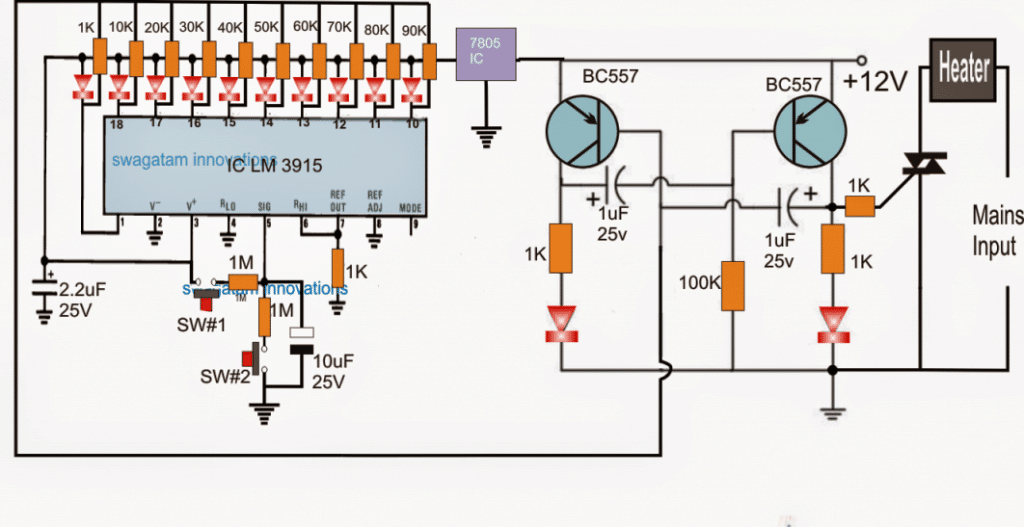 Let's try to understand the above shown push-button heater controller circuit in detail:

The design can be divided into two main stages, the LM3915 stage which becomes responsible for creating an up/down sequentially varying resistances in response to the two push button's pressing, and the transistorized astable multivibrator stage which is positioned to respond to the varying resistances from the LM3915 outputs and generate a correspondingly varying PWMs. These PWMs are finally utilized for controlling the connected heater appliance.

You may be already knowing that the IC LM3915 is designed for producing a sequentially incrementing output across its pins 1 to 18 to 10, in response to an incrementing voltage level at its pin#5.

We take the advantage of this feature and employ a charging/discharging capacitor at its pin#5 via push buttons for implementing the required forward/reverse sequentially running logic low across the mentioned pinouts.

When SW1 is pushed ON, the 10uF capacitor slowly charges causing a rising potential at pin#5 of the IC which in turn enforces a jumping logic low from pin#1 towards pin#10.

The sequence stops as soon as the push button is released, now to force the sequence backwards SW2 is pressed which now begins discharging the capacitor, causing a reverse jumping of the logic low from pin#10 towards pin#1 of the IC.

The above action is indicated by the chasing red light across the relevant output pins in the same order.

However the actual implementation of the proposed push button controlled heater circuit is carried out by the introduction of the PNP transistor astable PWM generator circuit.

This astable circuit generates an approximately 50% duty cycle as long as the resistor capacitor values across the bases of the transistors are at an equilibrium, that is the values are equal and balanced, however if any of these components values are changed, a corresponding amount of change is introduced across the collectors of the devices, and the duty cycle changes at the same proportion.

We exploit this feature of the circuit and integrate one of the bases of the transistor with the sequencing outputs of the LM3915 via an array of calculated resistors which correspondingly change the base resistance of the concerned transistor in response to the pressing of SW1 or SW2.

The above action produces the required varying PWMs or duty cycles across the transistor collectors, which may seen hooked up with a triac and the heater appliance.

The varying PWMs enable the triac and the appliance to conduct or operate under the induced amount ON or OFF switching creating an equivalent amount of increase or decrease in the heat of the appliance.

Hello Swag, I have to say I have been coming here to your site for at least a year and a half, regularly to check out your cool circuits, and it is my favorite site on the web! I recently bought a house, and it had a relatively newer dishwasher in it, but I installed mine because it matched my eye for the new scheme in kitchen. So since have re-purposed most of the old one into various projects, and the heating coil is just like new (It states 600 Watts) and I have been wanting to build a PCB… Read more »

Thank you Michael, It’s a pleasure to have you in my site, appreciate it lot. Although I do not have much practical experience with heater coils and gadgets like PCB hot plate, I believe that the project is definitely achievable. However I am not sure regarding the magnitude of heat that may be required for this. But no problem, the heat can be always regulated with the help of a dimmer switch, so you can go for the heavy duty coils and then regulate it through a dimmer switch as per your application limits. Let me know if you have… Read more »

What should be the resistance and wattage of the resistor at the base and emitter of the transistor at the circuit in the link above so that i will get 5amp at the output i'm using tip142?

it will work for 5 amps also…

it have already given the link in the previous comment, here it's once again, the first circuit.

But sir how i'm i going to connect 5pot to each circuit and connect in parallel…that'll be difficult to adjust the voltage…what if i connect all the inputs pins of the ic in together and also connect all their adjust pin together and then use a diode to connect the output together and then use the different terminals to construct the given circuit?2.what value of diode should i use 3.to remove the current limiter stage i have to remove the transistor at the adjust pin with the limiter resistor right?…i'm just soldering the auto cutoff stage but i've not assembled… Read more »

you can use calculated fixed resistors for the pots.

you can use a single 317 also and put a transistor over it for increasing current.

victory please post your comments in the relevant article, because this article is not related to your questions.

response to your another question: the relay may be ON due to leakage current from the opamp….use a 3v zener diode in series with the base of the transistor this will solve the issue.

Hello sir, i bought the components today i'm using 6a10diode as rectifier 12v 10amp 400ohm relay and i couldn't find any single 5amp voltage regulator so i've decided to use 5 lm317 in parallel please help me as how i can connect it (2) i need to charge my battery with 1/7.5 of it's ah value thats 38/7.5 which will give me around 5amp but 0.6/5 gives me around 0.12ohms as the resistor value for current limiting and i couldn't see that value so does that mean that i should remove the current limiting stage?if yes tell me the components… Read more »

Hello victory, make 5 circuits with the following configuration each: 2.bp.blogspot.com/-q-nD43obNhQ/TuOI-cTbCnI/AAAAAAAAALQ/yq7OTDf5jEs/s1600/IC+317+Power+Supply%252C+Simplest.png then join their inputs in parallel and connect to the source voltage…and also connect their output together but through individual diodes and then use the voltage from the common point of these diodes to charge the battery. make sure to use separate large heatsinks for each of the ICs. or alternatively you can use a single IC and add a transistor for increasing the current as shown in the first diagram here: https://www.homemade-circuits.com/2012/05/dc-to-dc-double-cell-phone-charger.html you can forget about the current control stage I think it is not important since the… Read more »

But if i rectify a 15vac from a transformer of 5amp and feed it to lm196 will the output be equal to 15v 5amp i'm using 1n4007 as the rectifier diode .2. From ur statement does that mean that i can use 12v 8amp relay to charge my 12v 38ah battery..if thats correct please suggest to me the resistance value of the relay.

no, the output could be around 12V…

What if i use another 5a regulator ic like lt338 or even lt1038 (10amp) or lm196 with my 18v 4amp transformer will the circuit work?…also what should be the resistance and amp rating of the relay?

If it's available with you you can surely use any of these but I thought LM338 was much more easier to obtain…however LM196 is specified to work with a max input of 15V..you may want to check the datasheets of the relevant ICs and confirm their tolerances first.

the relay contact rating should be preferably twice that of the intended charging current.

Please mr swagatam in ur smart charger circuit using the formular 0.6/I to calculate current limiter the relay is supposed to trigger at 14v does that mean that the relay should be a 14volt relay? If no please suggest to me the relay to use with an 18volt transformer to charge my 12volt 38amp battery also, what other ic can i use inplace of lm338 to charge this battery as i can't see this ic where i live (3)i want to add a 4.7k pot to adjust the voltage output of the ic to 14v please where should i connect… Read more »

Victory, the relay can be a 12V relay, that does not matter much, LM338 has no direct replacement, you can use two or three LM317 in parallel instead.

Definitely building this one too, I am interested in controlling a fan motor!
Thanks Swagatam!

Thanks Vasilis, yes, most AC load can be controlled at the shown position, including a fan.