The post discusses a simple electronic temperature regulator circuit which could be specifically used for regulating greenhouse temperatures. The idea was requested by Mr. Leo.

My idea is to use black drip irrigation pipe as a 'solar panel' to heat the water and with a low volume pump regulate the temp under a propagation tray. Any advise is greatly appreciated.

I have seen similar setups for egg incubators , fridge temp controls, etc. but need it at an allotment, so only power source is small panel. also if possible would it be possible to increase capacity of internal battery and have a heating element added.

Before getting into the main circuit concept, it would be interesting to learn regarding a few of the parameters expressed in the above request, as given below:

What is "black" drip irrigation:

We all probably have heard a lot about drip irrigation, a method in which water is fed to the crops across the entire allotted field through a network of narrow pipe lines wherein water is allowed to drip directly at the bottom of the stem of the crop for a sustained period of time. The method helps to save water and allows the water to reach the crucial areas such as the roots of the crop resulting in a better growth and efficiency.

Here an identical approach is implemented but the conventional pipes are replaced with black coiled PVC pipes. The back coiled pipe helps to absorb the heat from the sun rays naturally and allow the water passing through it to become warm naturally without depending on costly artificial utility electricity. The warm water ultimately helps to heat up the soil deep inside for acquiring the intended greenhouse effects.

These could be arrays of plastic plantation pots arranged in a large tray like fashion for allowing deeper soil content to the seedlings over minimal spaces, it's specifically designed for optimizing indoor plantations.

It may refer to a small garden or a plot of land as explained here:

The Solar Panel: The specified solar panel is a self contained unit which includes a solar panel with outputs at 5,
7.5 & 9.5v DC (0.5A). It also includes a 4-step charge indicator circuit and most interestingly it includes a built-in 2200mAH Li-ion battery so that you don't have to bother about external battery integrations, rather would be able to use the existing facility under overcast conditions. 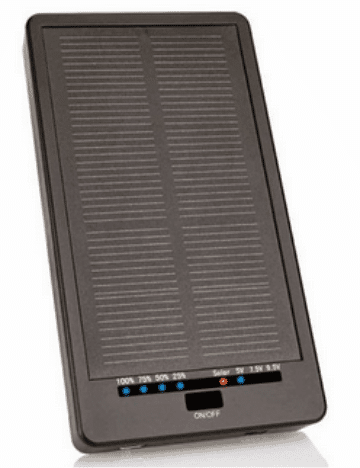 Now let's return to the actual requirement of the proposed greenhouse temperature regulator circuit, the idea here is to sustain a raised temperature of the soil by 10 to 20 degrees Celsius above the atmospheric temperature for boosting or enhancing seed germination.

Because seeds normally germinate faster in soils that are warmer than the atmosphere, which in turn results in an initial stronger root development instead of bigger leaf development.

Generally, heat mats are used below the propagation trays for heating the soil but in the present application the drip water is itself heated and used for generating the same results, which looks much impressive, since heat mats could at times get messy causing sparks, fire or over heating of the soil (if the attached thermostat fails).

Nevertheless, the electronic temperature controller circuit discussed below could be used with any heating system, including heat mats.

Referring to the diagram above which is actually a simple temperature controller circuit, could well be used for regulating the soil temperature in the proposed greenhouse application.

Here the temperature sensor D1 is our very own "garden" diode (no pun intended ) 1N4148 which translates every one degree (C) rise in the ambient temperature into a 2mV drop across itself.

The opamp A2 is specifically arranged to detect this change in voltage across D1 and feed the difference to A3 such that the result illuminates the LED inside the attached opto coupler IC.

The threshold at which the above action takes place could be preset with the help of P1.

The output of the opto is connected with a NPN driver stage which is responsible for switching off the heater as soon as the above threshold is reached.

The sensor and the heater may be placed across any desired position, as per the user preference. For example the heater could be positioned below the propagation tray, or inside the water tank from where the water is being supplied to the black pipes.

On same grounds the sensor may be placed anywhere around, could be below the propagation trays, inside the soil, inside the pipe or simply inside the water tank.